Things to do in Belize

Things to do in Belize

A list of best things to do in Belize 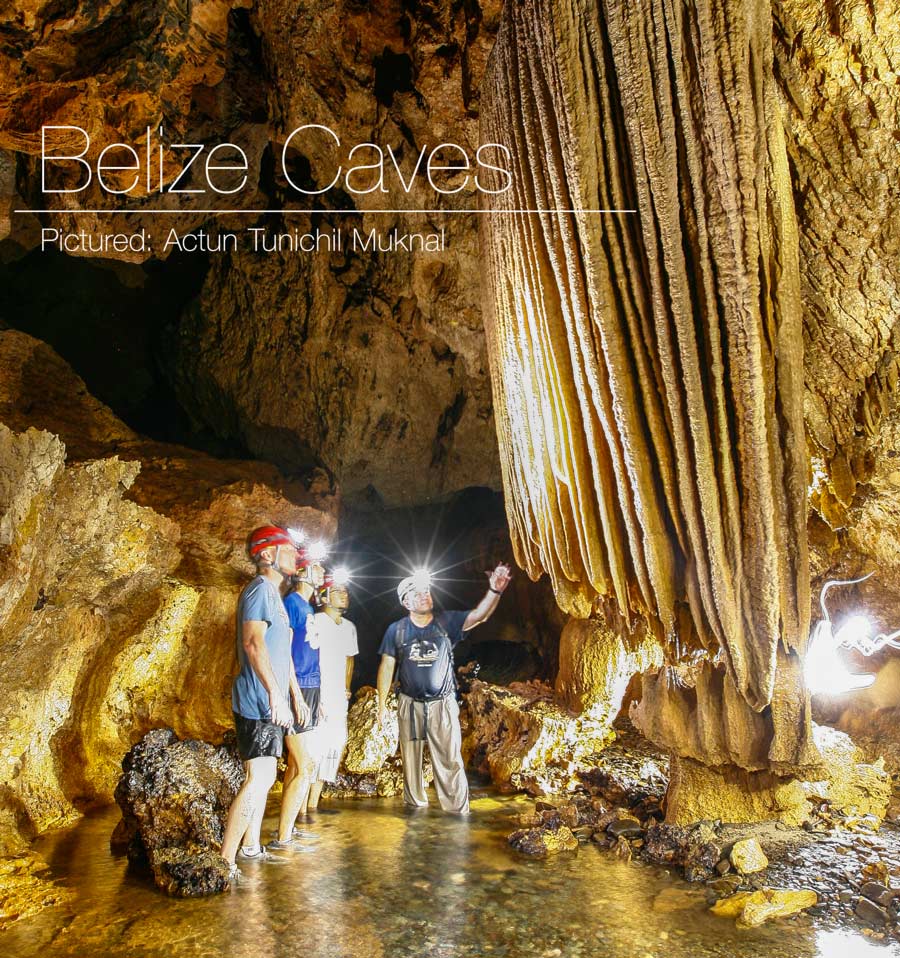 Belize hosts a wealth of limestone Cave systems, many of which were used by the ancient Maya for what we believe today to be ritual sacrifices to the Gods of the underworld, "Xibalba". Today quite a few are open to the public and daring explorers such as Actun Tunichil Muknal (ATM for short) in the Cayo District and Horeb Ha in Toledo.

The ATM cave is a curiosity in and of itself and while guided, it is still not for the faint of heart. That's not to say there's a frightening experience to be had there but a challenging one which should be reserved for the avid explorers. The cave is punctuated by low ceilings, narrow water ways and high climbs that make it impossible to simply “go around”, but for those stalwart enough to make the trip the wonders held inside will hold an intriguing position on your memoirs forever.

Not all Cave tours need to be rock-climbingly difficult though, as tubing through caves branch and paddling though Barton Creek Cave are also wonderful ways to discover Belize’s ancient underworld wonders while relaxing at the same time.

Barton Creek cave is in heavy contrast to ATM but not to be taken lightly in the least. The cave entrance seems rift-like, a portal through time into an age old museum of natural process, coming out the other end is like being re-born into the light after a long tread though darkness.

This guided canoe tour takes you through almost two kilometers of limestone formations bordered by ledges that cling to both the walls and the artifacts left there centuries ago. While there are narrow passages, the cave sometimes opens up into amphitheater sized rooms with ceilings towering high above your head reminiscent of gothic cathedral architecture with stalactites for columns. It’s the kind of experience only your mind will justifiably picture. 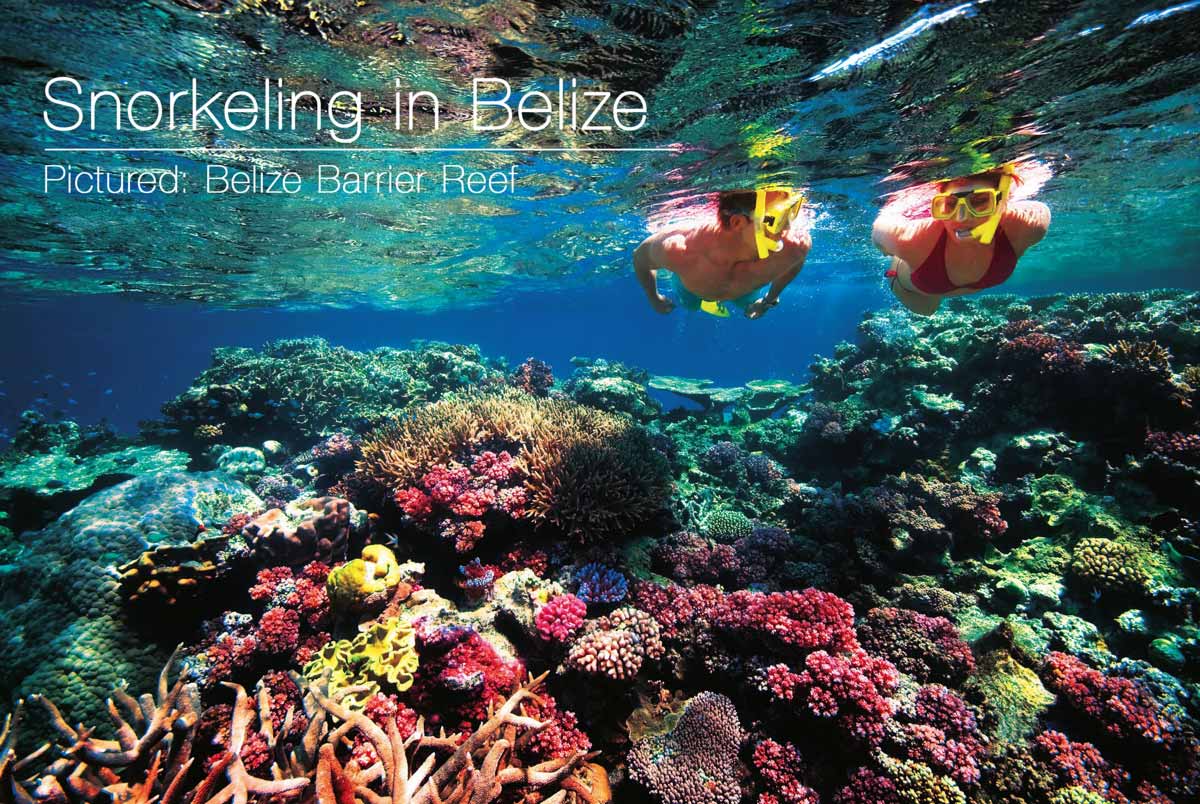 Boasting the longest stretch of healthy coral reef this side of the world means Belize supports a wealth of opportunities for diving and snorkeling. Hol Chan and Shark-Ray Alley are gorgeous areas for snorkeling near the reef and meeting all the inhabitants therein, you can even swim along with nurse sharks!

Hol Chan (Mayan for Little Channel) covers an area of about 8km2 and is comprised of four zones which each denote a distinct type of marine habitat and zone D is Shark-ray Alley which was designated because it was a meeting ground for nurse sharks and southern rays. The focal point of this reserve is situated at a “quebrada”, a split in the reef only about 23m in width and 9m deep situated in what is known as zone A.

This area is a must see for any tour heading to or around the northern cayes and provides a great opportunity to experience what aquatic life is line for Belize’s natural residents. In shark ray alley the nurse sharks and rays literally swim up to you giving the impression that they would like to be touched, though it is advisable not to, and near the reef all the local fishes swim by quickly as though minding their own business truly giving you a look into what daily life is like for them.

For the more experienced in aquatic traversal diving into the Great Blue Hole off the coast near the Lighthouse Atoll is a once in a lifetime experience comparable only perhaps to swimming with the whale sharks along their yearly migration.

The great blue hole is a limestone sinkhole formation that began its life over 150,000 years ago above water, before the seas rose to where they are today and has an estimated depth of 125 meters at its lowest point. This area is also home to many of Belize’s fish species, quite different from those in and around the reef giving divers a unique chance to experience a completely different habitat a stone’s throw away from the rest of the barrier reef.

In late May to early June, whale sharks, quite literally the largest fish in the sea make their way past the southern coast of Belize on their yearly migration north into the Atlantic. The whale sharks, like the nurse sharks are very tolerable to divers, and even though their mouths are big enough to swallow us whole, they pose no threat due to the fact that they’re filter feeders, eating krill and plankton that photosynthesize close to the water’s surface during the day.

Chances to see these natural submarines are few and far between, even in Belize having only a 2-4 week window to make it out to see them. 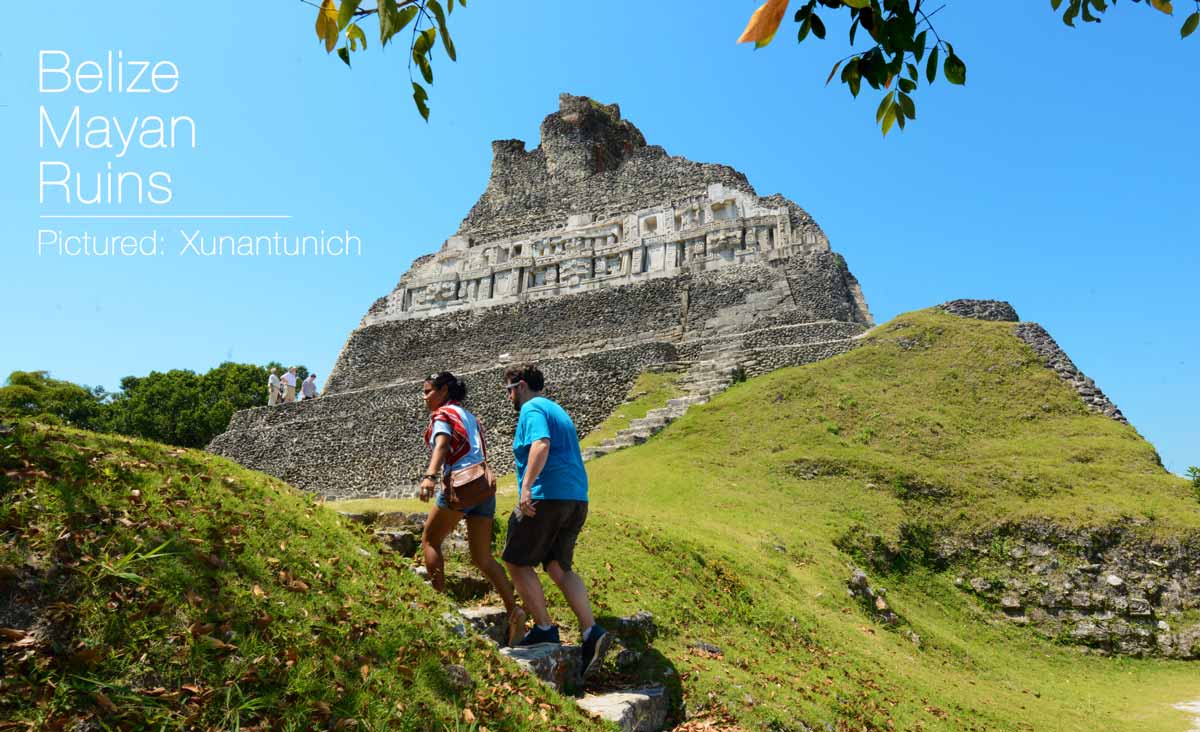 With over 900 documented Maya sites it’s hard to get bored here, historically famous sites like Caracol, and Altun-Ha will dazzle you with their staircases stacking seemingly toward the sky and if you stay long enough you can witness the sunset from some of the still-tallest edifices in Belize.

Caracol’s name came as a result of the winding road that archaeologists would have to take to get there, glyphs have been found depicting the rulers referring to themselves as the “Three Hills Lord” which indicates the name we gave it might not have been its original name.

Caracol is famed for having been a rival of the great city of Tikal in Guatemala, it is quite literally a sky fortress perched atop a peak in the Maya Mountains of Belize and historical records note it as a great military presence in the region. Much of it remains un, or partially excavated given to the sheer density of structural presence in the area but there is still much to see and the main temple is an impressive monument, almost fourteen stories high.

From the top it can be seen as a temple atop a temple due to the open plaza a ways up which leads to three distinct smaller temples crowning the entire edifice. Caracol is a great bird watching spot and as you’d imagine a great hiking experience.

Xunantunich, meaning stone lady is another example of a temple name not being what the Maya gave it. The stone lady is an urban legend surrounding the area in which people claim the apparition of a woman clad in white with fire red eyes appears at night and ascends the stairs of “El Castillo” which happens to be the tallest temple on the grounds. Like many other maya sites in the area, Xunantunich is set on a hill and overlooks a very wide area of Belize, even some few miles into Guatemalan territory. It is interesting to note, what while not a site of particularly major importance in the Mayan era, El Castillo is the second tallest temple, second only to Caracol at 130 feet high, the vistas are gorgeous and exploring the cracks and corners of this site is one of the most interesting yet.

Do remember, if you’ve been to a particular site before don’t be afraid to re-visit as there are always new digs opening up expanding existing plazas and discovering entirely new areas that haven’t seen the light of the sun or moon for centuries.

Dubbed "the best little zoo in the world", The Belize Zoo began as a result of a last ditch effort to provide a shelter for animals that were used in documentary films featuring Belize's tropical forests. The zoo provides visitors the best wildlife encounters, boasting over 170 animals all native to Belize, and also endangered species like the jaguar, scarlet macaw, black howler monkey, and jaribu stork. Recent infrastructural developments has now made it the first fully accessible nature destination to visitors with physical disabilities. This is also the best place to get excellent photographs of Belize animals. 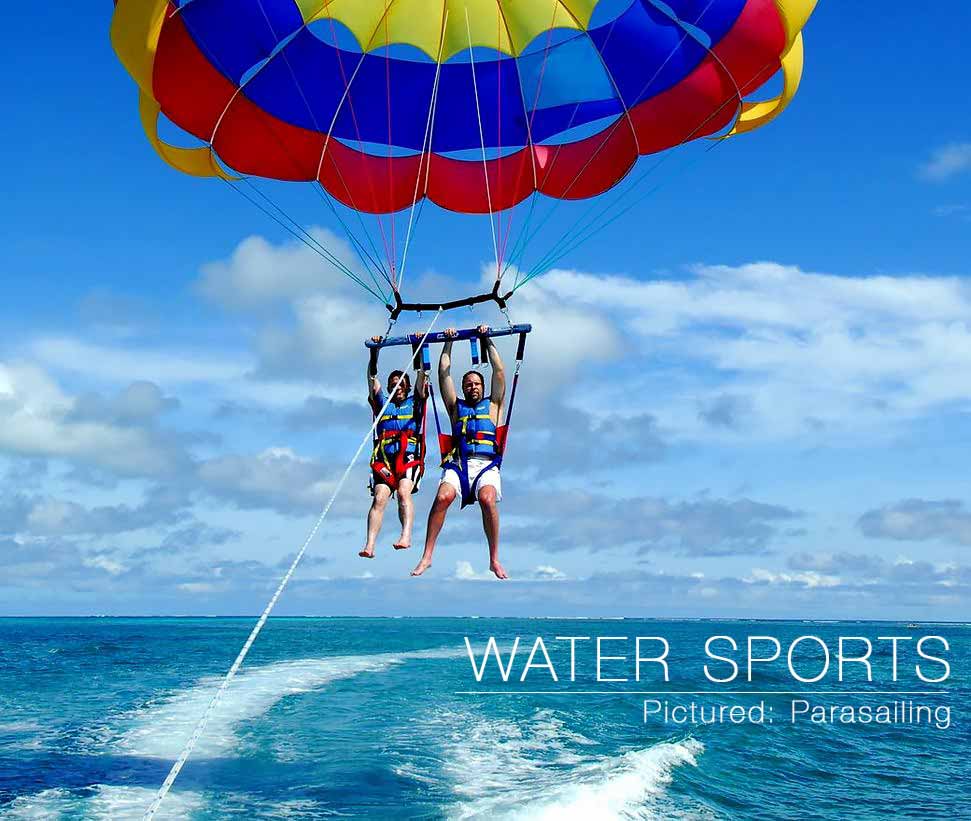 If you’ve had your fill of diving and snorkeling and wish there were something else to do, Belize still has you covered. The cayes offer all manner of water sports such as para sailing, sail boarding, paddle boarding, banana boats, jet skis, and for the more sea savvy there are also catamarans to be sailed.

Beaches are fun when you’re building sand castles or getting covered in sand by your friends, but there’s so much more to do on the islands of Belize.

Along the beaches are dozens of hotels, equipment rentals and tour companies happy to give you a taste of what life is like off the sands. From san Pedro it’s possible to kayak or paddle board out to the reef if you’re strong enough and the wind is on your side, if you fancy an aerial view that lasts longer than your flight in then para-sailing is for you, getting strapped safely into a parachute and being pulled along the coast by a boat has to be one of the most liberating feelings ever, not to mention the birds eye view of practically everything going on around the island!

If you fancy being the captain of your own trip then maybe a jet ski is for you, zip around on your own terms, or better yet rent a catamaran and go as smoothly as you like, you can also actually call yourself captain then.

The original island inhabitants were all fishermen and fishing tours are also common fare off the coast, both within, and for the daring anglers, beyond the reef for big catches. There’s not many things that compare to catching your first fish, or your hundredth fish, or even more so your first big fish and if you’ve not done any then that should be among the tops of your list.

Inland Belize is also prime territory for water fun with cave tubing, canoeing, pontoon tours and good old fashioned fresh water swimming to round out the roster.  The Rio on Pools, and Big rock falls in the Mountain Pine Ridge area are perfect examples of naturally created granite formations worn and cut by running water. The springs that feed these locales provide some of the cleanest, freshest, coolest water that will delight anyone, especially on a hot day.

The Cayo and Stann Creek Districts are nestled in and around the Maya Mountain Range that reaches its peaks in Belize making these areas perfect for those who like to head out and enjoy nature. Most famously, Victoria Peak in the cockscomb basin is a favorite for mountain climbers and is a grueling hike to the top with a satisfyingly magnificent view thereafter. Despite the popularity of Victoria peak the actual highest peak in Belize is Doyles delight though only slightly taller will provide just as much of a challenge to anyone who dares to try for the peak.

Also in the cockscomb basin, the world’s only jaguar reserve, there are a wealth of jungle trails to traverse and explore with the added bonus of chance encounters with some of Belize’s most elusive species of animals. Much can be mentioned for hikers, The Mountain Pine Ridge range with its countless falls and rivers to explore, the Maya sites, you’ll be staying a while if you want to do it all!

For those of you who enjoy the rustic life, being one with nature and generally roughing it then everywhere here is an awesome place to set up a tent. Many Resorts, reserves and rest stops include camping facilities or grounds to do so on, think camping on a beach, or camping in the mountains where your only lights are the stars, or pitching a tent under the jungle canopy like the locals and explorers of old. There really are very little limits and with that, so very many opportunities to become one with the flora and fauna that call this tropical jewel home.